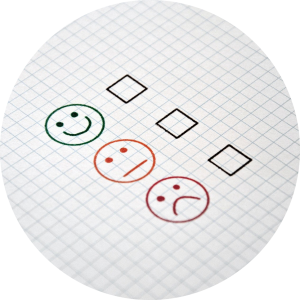 No one likes rejection. Whether it’s from a love interest, friend, or after a job interview, it hurts.

But rejection can be the perfect time to stop, think and react in a positive way instead of crawling under a rock and ignoring it.

A candidate that I was working with – we’ll call her Amber – is a prime example of how this approach to rejection can work. I just placed her in a very niche role for one of our clients. But this wasn’t Amber’s first time going after the position.

Since the role was working with a voice over assistant for an app, it required very specialized skills that Amber just didn’t have. When she originally interviewed for the position, the feedback from the client was that she was too junior. I was up front and told her exactly how they responded.

Instead of giving up on the position with a feeling of dread and disappointment, Amber decided to beef up her skills. She was extremely passionate about the job and wanted to learn, so she took a bunch of classes and came back and eventually got the job.

Candidates like Amber should be an inspiration for what you can do after job rejection. If you need a little bit more convincing, here is how I would advise any of my candidates to handle not getting the job.

Listen to the feedback with an open mind. If you’re immediately defensive and closed off about why the company didn’t want to hire you, it’s only going to end up with you on the couch with a tub of ice cream. And that’s not going to be good for you or your job search. It’s always better to have the feedback than be ghosted and not know why they didn’t choose you.

And if you lash out at your recruiter, that’s not good for your relationship with them either. The recruiter is just the messenger, so don’t take it out on them. More often than not, they are relaying the message to you exactly how they got it from the hiring manager. And your recruiter is going to be much more willing to help you find another job if you’re understanding and calm about the situation.

Don’t take it personally. I know, easier said than done. Especially if the hiring manager is critical of your personality. Your ego can easily get bruised when you’re told something unique about you is undesirable. Most times, it’s virtually impossible to change our core qualities, but we can change our actions. So, think about that the next time you are criticized on your personality. You can always choose to react in a positive manner.

Just a few weeks ago, a candidate I worked with had the hard skills in the bag. But the company came back to me and said he lacked the soft skills to interact effectively with other team members on a personal level to get things accomplished. You can improve if you take the feedback to heart. View it as a learning experience.

Don’t feel attacked if you’re told “you’re not a fit.” Many times, the rejection is simply because you’re not a fit for the team. Companies have come to recognize how important cultural fit is when hiring a new employee. Some would say it’s the most important factor in retaining employees from the get-go. Choosing candidates that don’t mesh well with the vision and values of the company can lead to a downturn in productivity, reduced job satisfaction and then, ultimately, employees leaving. And employee turnover is expensive.

And, don’t forget, the culture fit goes both ways. If you don’t feel comfortable with the style of the work environment, the values of the company and what the work entails, you’re going to be unhappy. And then you’re forced into a situation where you have to start all over again with your job search and the dreaded interview process.

Take it as constructive feedback. If you’re told you just don’t have the skills, like Amber was, take it and run with it. For some roles, it’s easier than others to take classes to advance your skills. For example, if you need specific Excel skills to be a programmatic trainer, training on that tool is a tangible way to up your skill level and come back to the table.

But, what if you’re a UX Researcher with strong design skills but lack the research skills and the hiring manager wants you to do both? I advise my candidates to do their own research, learn from meetups and conferences and if that doesn’t work, find a job where you can learn these skills. Sometimes you have to go back and learn more before you can move on to the next role.

Don’t write off the company. While feedback given after an interview is typically negative, don’t think the company you interviewed with is terrible. And don’t just write them off for future opportunities. You never know, a position at the same company may come up in the future that you are capable of landing.

This goes to the adage of not burning bridges as well. Your professional network can make a huge impact on your job search. In business, referrals are key. And that means, staying in touch with and fostering positive relationships with the professionals you know, even if they rejected you before.

To sum it up. I don’t enjoy giving candidates negative feedback after interview, but it’s part of my job. When I have to, I do it in a straight-forward manner, so they are fully aware of where they need to improve. That’s the only way we learn and grow. And that’s what life is all about! It’s just like Albert Einstein said: “once you stop learning you start dying.”

About the author
Madison Jinks is a Creative Recruiter for Synergis. She connects candidates with their next dream job in the creative space. She specifically focuses on recruiting for UX Designer jobs, UX Researcher jobs, social media & marketing positions. To stay on top of industry trends, she frequently participates in networking events around the metro-Atlanta area. Madison graduated from the University of Alabama with a bachelor’s degree in journalism. In her free time, she likes spending time with her dog, Prancer, and cheer on the Crimson Tide.

5 tips to maintain your productivity while working from home